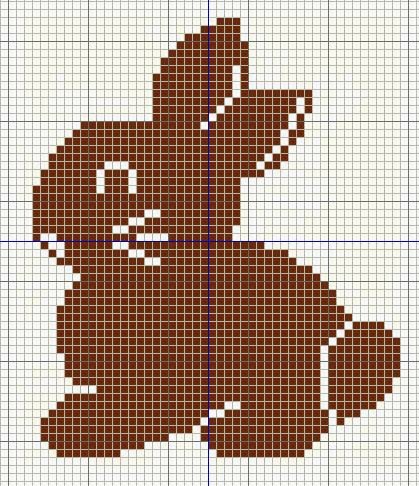 This is a large cross stitch design of a cute little rabbit, its large enough for a cushion.
Theres also a tiny one here for a simple Easter card: 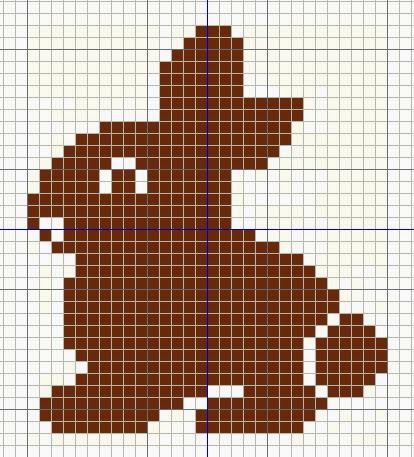 I am not offering any colour suggestions for this design since it can be sewn in any colour thread you think would look nice.

Hi there, Heres another bunny design for Easter made from whole stitches only and this time only one thread colour (unless you want to use a little white for the nose and eye). This is surely a really easy bunny design even for the newest of stitchers.
Would anyone like to see any of these bold silhouettes filled with patterns? I'm thinking some colourful vintage patterns on cute bunnies but lets see what I come up with.

On the last Easter bunny post I mentioned the ever fabulous Uncle Charlie was going to make the Easter bunny appear at our Annual Grand Easter Egg Hunt. So we did a bunny appearance test run last weekend and boy did it cause mayhem! Are you ready for this guys?

Heres a link to the last Easter bunny post if you'd like to check it out: http://buzybobbins.blogspot.co.uk/2015/02/pink-bunny-silhouette-cross-stitch.html

This year we wanted to do the Easter egg hunt at my Dads since he has lots of space. He also has several chickens, a bunch of ducks, an energetic Jack Russel and now two super cute border collie puppies. Uncle Charlie came down to test out his master plan first he got out a Radio controlled car and tied a bunny plushie to it. He hid it in the bushes while we sent the ducks and chickens into a walled off area of the garden to be safe. The grand plan was to have the RC car burst out of the bushes and drive around the garden with a plushie rabbit tied to it to look like it was running around the garden. The test run started well, the car did not get stuck in the grass but it did get the attention of all three dogs. They started watching carefully but before we could call them all back like lightning the puppies started running after the RC car. Of course Uncle Charlie wanted it back in one piece so he started using the car to dodge and weave away from the puppies. My Dad and I started to call the puppies back but they were very into catching the car that they were not listening at all.

We shouted at Charlie to get his car back while we rounded up the dogs. However he was worried the puppies would damage his car if he stopped it. So he had the idea of driving his car under the gap in the fence and picking it up safely out of the dogs reach. So he just happened to choose the fence where the ducks and chickens were safely behind and drive the car right in there. Although he didn't drive into any of the chickens they must have gotten such a fright as they all started making such a racket and flapping their wings. The ducks were not too bothered though.

We had a garden full of excitable animals so we suggested to Uncle Charlie that perhaps this was not the best idea if it caused this much mayhem without all of the excitable kids around the place too. Plus it was kinda obvious it was just a plushie on an RC car and really was quite loud unlike a rabbit would be.
So he said he'd come up with another plan. I'm looking forward to the next test run to see what he comes up with next. I'll keep you all updated on this. Next time we will keep the puppies away from the garden until the test run is over.
Bye for now :D

For the Buzy Bobbins Index page Click here.
Posted by Gemma at 15:05