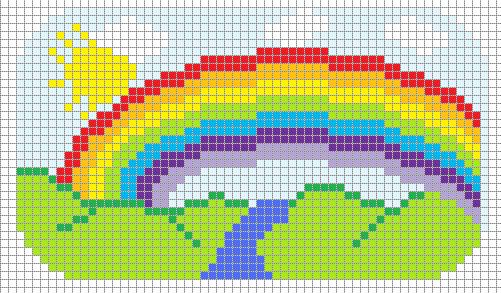 This is a card sized design for a colourful rainbow over some grassy hills.

This design was originally part of a baby sampler however the Mum decided on a different design after I drew this one. The rest of the design was simply the Babies full (and rather long) name in rainbow colours, the picture was small so I could still fit in the babies name around it. To do this design yourself pick or draw a cross stitched font to work with, if you are unsure how the rainbow lettering will look it may be worth sketching it out on some graph paper and using coloured pencils for each colour. I have used the standard Paint program to show these designs if your curious how to do this yourself please see the Blog post Using Paint for Cross Stitch Design for more information on this.

Here are some examples of how to make a plain font rainbow coloured:

Here is the word I'm going to turn rainbow coloured, for this example I'm using my own font the rest of which can be found on my Blog post Fancy Alphabet Cross Stitch Design.

When I am using Paint to fiddle about with fonts I tend to write the word out first then copy and paste the design a few times so that I can have several goes at altering or colouring the font, by doing this I can see what looks the best before even threading my needle. These examples should give you some idea about simple ways to add colour to plain fonts and how they may look. Also in many of these examples I have used the colours of the rainbow, however don't be afraid change the colours to ones which compliment your main design.

This is really simple especially for multiple lines of text such as a long baby name with many middle names.
You can either make each line of text a different colour or copy the example picture.

For this example the easiest approach is to have each letter in a different colour but if you want to add more colours or for larger fonts cutting the letter in half will allow you to add more colour and detail.
The downside of this it will take more time to sew.

I have only ever used this type of colouring for small cards where the words are the main focus of the picture such as a large colourful Happy Birthday as the main focus of the stitch. This is really not recommended for longer pieces of text unless you are quite confident that all those tiny patches won't be frustrating, in the case of larger fonts it recommended to make patch of colour larger to compensate.

This is an example of a word with a rainbow stripe. When designing this bare in mind that larger letters can afford to have thicker stripes. Tiny letters may benefit from having fewer stripes such as red, green and blue rather than trying to fit a whole rainbow into a letter less than 7 stitches high.

I am a very big fan of rainbows on black due to their striking appearance, if you are sewing on black aida the rainbow letters simply won't look out of place on black. Other than this the same points apply as having rainbow coloured letters on white.

Rainbows within the letters

In this example I have drawn a rainbow within the letters. This works best with a section of text which covers more than one line simply because on one line the curve may not show up as well unless the letters you are using are quite tall or chunky.
For areas outside the rainbow I used a nice sky blue colour to fill in the remaining sections, you could not leave these areas uncoloured since you would be missing parts of your letters and darker blues may be confused with parts of the rainbow.

So that's it for now. I hope you have had some ideas about using colour to spice up plain cross stitch letters. Remember you never have to stick to a chart or design, call it a guideline or a starting point and let your imagination run wild.
Posted by Gemma at 17:25