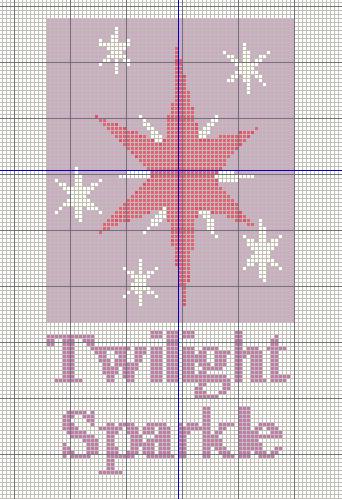 This is Twilight Sparkle's Cutie mark design in cross stitch. I used a bold font for her because it remided me of old history books. Perhaps Like the old dusty Books that Twilight herself likes to read.
This picture has whole stitches only. I normally would not have a block if colour in a design but Twilights cutie mark his white sections witch do not show up on white aida. If you wanted to reduce the amount of stitches you need to sew you could do the smaller stars in a slightly off white colour or give them a small outline of purple. 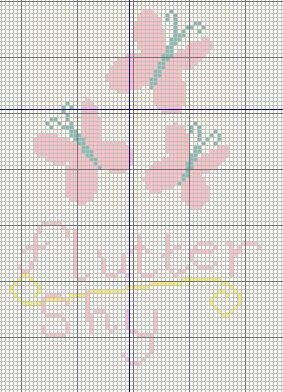 Fluttershy's Cutie mark cross stitch design. This one is super simple because the butterflies only need two colours. I drew her name in a hand writing style. The writing is a little elegant and perhaps a little rushed  just as I imagine Fluttershy's own hoofwriting to be. Shes probably quite neat but also rushed by looking after so many animals that she doesn't have the time to make it super tidy. 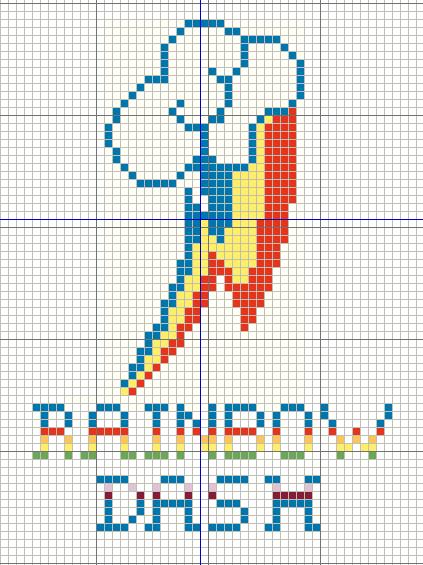 Rainbow Dash Cutie Mark design. I included a font which looks a little like it should be on the back of a collage sport shirt. Since if Rainbow dash was a human who could argue that she would be in a sports team. Plus of course its rainbow coloured.
If you want to make this design simpler you can change all of the rainbow colours just for the same blue, red and yellow included in her cutie mark itself

Heres an example of an alternative for the Rainbow Dash writing with fewer colours.


This design was drawn originally with Anchor colours in my program. Use anchor threads to get the closest match. I used a conversion chart to get the DMC numbers.
Please let me know if any colours are off and I will amend them in the chart.

I have been asked to do cutie marks of some of the background characters too. I have already started drawing Big Macingtosh's mark. So I will post a few more when I am done.

For the other main 6 cutie marks please follow this link: http://buzybobbins.blogspot.co.uk/2012/04/my-little-pony-cutie-mark-cross-stitch.html

These pictures are Fan art for My Little Pony friendship is magic. The characters and concepts belong to Hasbro. Im just sharing this fan art for all of the Cross stitching My little Pony Fans out there.

For even more My Little Pony Friendship is Magic Cross stitch designs check out the links below:
Cutie Mark Collection 3 - Cheerilee, Big Mackingtosh and DJ Pon3

For the Buzy Bobbins Index page Click here.
Posted by Gemma at 04:29