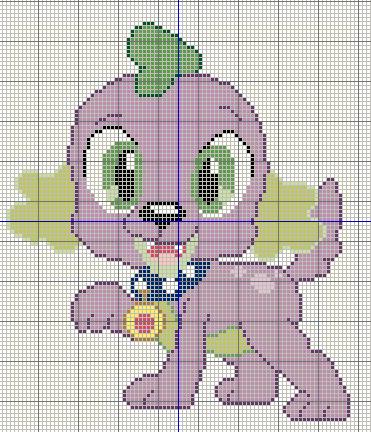 This design was drawn originally with Anchor colours in my cross stitch design program. Use Anchor threads to get the closest match to the picture. I used a conversion chart to get the DMC numbers.
Please let me know if any colours are off and I will amend them in the chart.

There are quite a few colours in this design but believe it or not my first draft of this pattern actually contained far more colours which I tried to reduce as much as I can to make it easier to sew. So the colours are not 100% accurate to the film but close enough to avoid several more shades of green/purple.

Heres a design for Spike the Dragon who has been Transformed into Spike the Dog (oops sorry if that was a spoiler for anyone) from the My Little Pony Film Equestria Girls.

Spike looks so cute as a dog. I do wonder if they will bring out some plushtoys of this character I think it would be great.
I did find this wonderful plushie of him on Deviantart http://www.deviantart.com/?q=spike+the+dog+plush#/art/Spike-dog-plush-374420866?_sid=741dada5 and it is just so adorable.


I shall be adding links to more Equestria girls cross stitches once I finish drawing them. Phew they are much harder to draw in human form than in pony form.

Spike and characters from Equestria Girls and My little Pony: Friendship is Magic belong to Hasbro. This is fan art for other cross stitching fans of the show to share.I claim no rights to the character.

For the Buzy Bobbins Index page Click here.
Posted by Gemma at 15:07