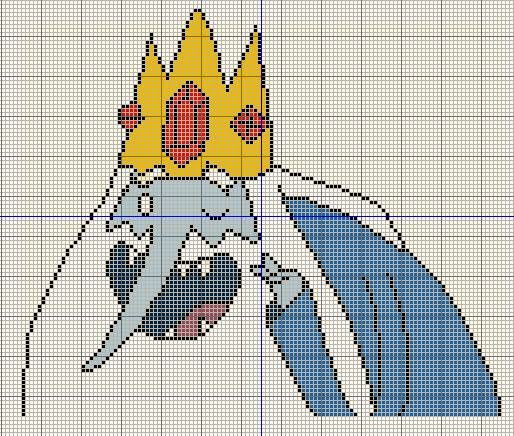 This is a Cross stitch design of the Ice King from Adventure time.

I find the Ice King a facinating character. In each episode we find out more and more about him which turns him from an icompitent villian into a sympathetic character.
*spoiler alert read at your own risk*
When we first see the Ice King in season 1 of Adventure time he is simply a bumbling Villain who Finn and Jake end up defeating on a regular basis. They never do away with him perminatly (this show is for a young audience I doubt they would kill him) but they could lock him up or send him far away. I suppose he wouldn't listen if he was banished and come back anyway.

At this point if there was no character development for the Ice King we would most likely see him fall out of use in the series or suffer villian decay (just like Jessie, James and Meowth in the Pokemon series) where the villian is no longer scary or does not even pose any threat because they have been defeated so many times by the heroes of the cast.

For more information on the ice king check out the wiki page here: http://adventuretime.wikia.com/wiki/Ice_King