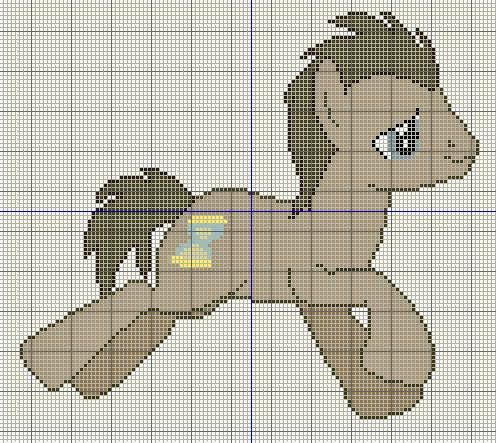 This is a background pony from the show My little Pony: Friendship is Magic who many fans pointed out looks a little bit like David Tennant as Doctor Who. This is backed up by the fact that his Cutie mark is an hourglass meaning that his super special talent may have something to do with time. This is confirmed in the My Little Pony mobile game as his discription is 'Dr. Hooves keeps Ponyville's clocks in sync, sets the hourglass for cider competitions, and takes care of all things timey-wimey.'
Timey-Wimey is an obvious reference to David Tennants Doctor as this phrase is seen in the episode 'Blink' in the following quote: 'People assume that time is a strict progression of cause to effect, but actually, from a non-linear non-subjective viewpoint, it's more like a big bowl of wibbly wobbly timey wimey... stuff.'

In one episode this character makes an appearance as a pegisis which some think may be a new form after a regeneration but in all fairness it could have simply been the reusing of a background character in a scene where lots of pegisis where needed. But you can always decide for yourself if you view the episodes for example 'Sonic Rainboom' where


For more Doctor Who Cross stitch designs here are some links:

And for more My little Pony fan art cross stitch designs this is a massive list of links for you.

For the Buzy Bobbins Index page Click here.
Posted by Gemma at 04:38