Adventures at the Frequency Festival in Lincoln - Part 1

Adventures at the Frequency Festival in Lincoln - Part 1

A couple of weeks ago I took a lovely trip to Lincoln to see the goings on at the Frequency Festival.

For those who haven't heard of the Frequency Festival it is a digital arts festival which takes place at venues all over Lincoln. Most events are free with only a few requiring advance tickets but there is still so much to see without spending a penny. Get your walking shoes on for this one since there are events at venues between the town centre and the castle at the top of Steep Hill.

Phew Steep hill is a bit of a climb! Luckily there is a bus up there for those who don't fancy the walk. Though it is worth it if you can. The view from the hill is spectacular as you can see far out into the green hills beyond the town centre and there's an array of shops all the way up selling some fabulous goodies. Don't forget the Cafes also... I've never had such a hard time choosing a cake to eat, there's so many lovely places to go.

Anyway without any further ado here's a few pictures of some of the exhibits I saw. Since there are over 30 in total I cannot possibly write about every single one so I just picked a few which I personally found interesting.

Through the Fourth Wall:
The instillation is located in an area not normally accessible to the public. It is inside an old underground system, accessible by a steep dark stairway. To get to the exhibit we were guided by people holding torches to navigate the very dark areas underground.
There are many places like this under many areas of the centre of Lincoln. The area this particular exhibit is down a steep stairway in is full of old walls and dusty remnants of life before the modern city was built. 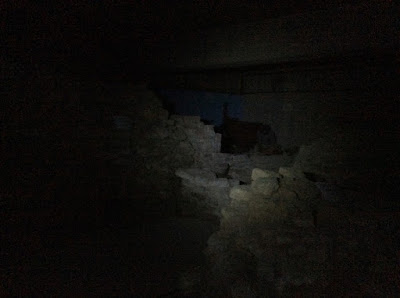 A shot of the area the Exhibit takes place in.

This display involved projections of little windows all over one of these old walls with another projection of a sky revolving on a day/ night cycle behind it.
One thing I noticed was that each of the little windows seemed perfectly aligned with bricks on the old stone wall. I must assume that the artist had this very space in mind when creating this presentation.
It's a strange feeling to be presented with all these windows looking into the day to day lives of the inhabitants. Some windows show people having dinner, walking in and out of the rooms, some working at a pc or chatting with others nearby. It's as if the viewer is also a voyer into this micro landscape. Like walking down the street and seeing people through their windows into their abodes but this time we are encouraged to view instead of knowing that staring into windows is an invasion of the privacy of those you are viewing. 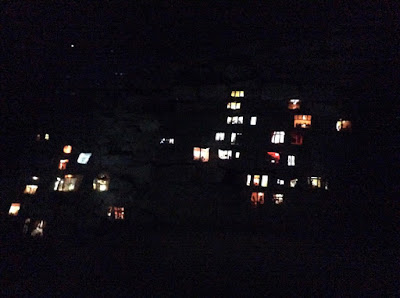 The lights of the windows projected onto the wall.

The whole presentation is 15 minutes long and is synced with a projection of a day, night cycle. The day goes past and no windows can be viewed but it is at the night when the windows start to appear. As the night goes on and we see the people in their homes at some point the people in each house notice the viewer, some take lengths to hide themselves, shutting their curtains and turning off the lights. While some people will stop to look back at you, wave and try to get your attention, you are no longer only the viewer but the one being viewed.

As a whole this installation is about young girls/teenagers and their interactions with social media and YouTube in particular.
This installation consists of 6 screens showing different videos. 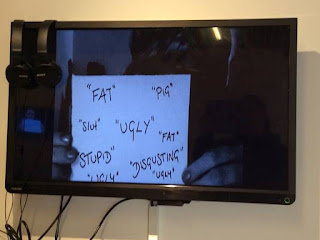 The presentation I found the most moving was a presentation containing what seemed like hundreds of YouTube videos of young girls asking the audience if they are pretty or ugly. Shockingly some of these girls look as young as 7 or 8 and they are already worried about their appearance.
Most of the videos are taken in a home setting, with the sounds of family around and messy bedrooms behind them. Also it's clear that many of the videos were taken on mobile phones, it's very different to how I grew up these girls have a means to broadcast themselves at will sitting in their pocket. The effort they need to take is very little just  to get it all out there, to put themselves up for scrutiny of the public.
Does it really matter to them? Are they attention seeking or do they really need to confirmation of thousands of people to even know they are pretty. None of the girls were ugly at all but you know that people in the comments would break them down. It makes you wonder how it will affect their self esteem. Or what happened to make them ask the question in the first place. 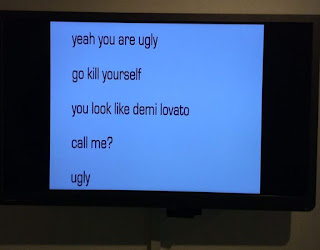 One screen consists entirely of comments to a YouTube video asking the viewers of they are pretty or ugly. It actually took me a while to find a point to take a picture since many of the comments were actually quite vile.
I would not suspect these are made up simply because the evidence is there on YouTube, any video contains terrible comments. It almost makes you wonder what these people are like without the anonymity of a computer screen.
On a lighter note, one of the screens showed girls being questioned about themselves. They were asked to write down something about themselves which was not to do with their appearance. The answers were as varied as the girls themselves. On the whole it was positive but afterwards each one was asked if they feel pressure about their appearance and many noted social media as a source of this. While social media is a wonderful tool for communication, it has a darker side, which I can't imagine growing up with. However this is the point of this exhibition and it does communicate it well. 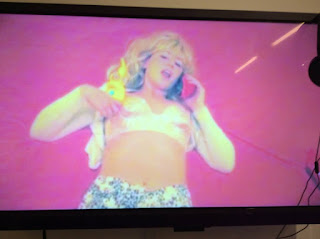 The last full video contained a woman who I believe is the artist pretending to be different YouTube girls.
One segment has her miming along to Oh Baby Baby (as sung by Brittney Spears), dressed sexually and gyrating on the floor. The song soon transitions to Que Sera Sera but the visuals do not change. Lending itself to a surreal yet slightly uncomfortable video. Followed by a voyer esquire look at her typing on a computer as if we are viewing her Skype call as we can see her screen reflected in the sunglasses she wears.

I enjoyed this presentation as it provoked many emotions and trains of thought. I really had to go and sit down in a quiet place after watching it all though. However this is the point of art after all to evoke thoughts, conversations and emotions out of the viewer and this one conveyed them well.
It did require at least half an hour to watch some of the videos so ended up being once which was a bit longer than the other presentations but as the viewer could dip in and out of the videos as they liked it was easy to fit them in.

That's all for now. I did see many other exhibits but will write about them in another post to save this one getting too long.