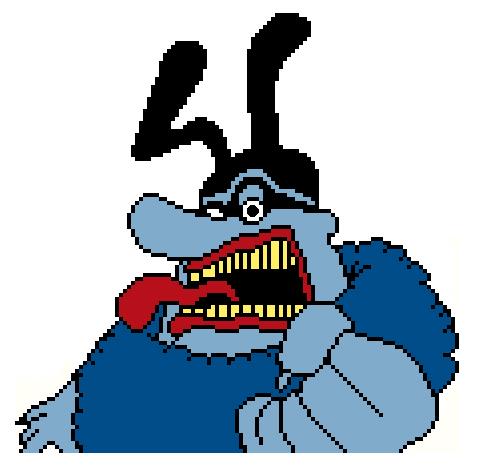 Hello Everyone,
I am waiting in excitement for the release of the official Yellow submarine Lego set on the 1st of November. Heres a link to the page so you can see it in all its bright yellow glory:
https://shop.lego.com/en-US/Yellow-Submarine-21306

Anyway since I ended up having to re-watch the Yellow Submarine to tide me over while I wait I just had to do another design based on this film and today its the Blue Meanie who wishes to take over Pepperland and make everything Blue.
I did attempt to draw the Flying Glove but after several attempts it didn't turn out quite right. So I may try it again and finish it off if I get asked for it but right now its been a very difficult to get right.

If you are a fan of the Yellow Submarine as much as I am maybe you would like to see my design of the submarine itself which can be found here:
http://buzybobbins.blogspot.co.uk/2013/08/yellow-submarine-from-beatles-yellow.html

The yellow submarine Film was made by
Apple Films, King Features Syndicate and TVC London

For the Buzy Bobbins Index page Click here.
Posted by Gemma at 05:29