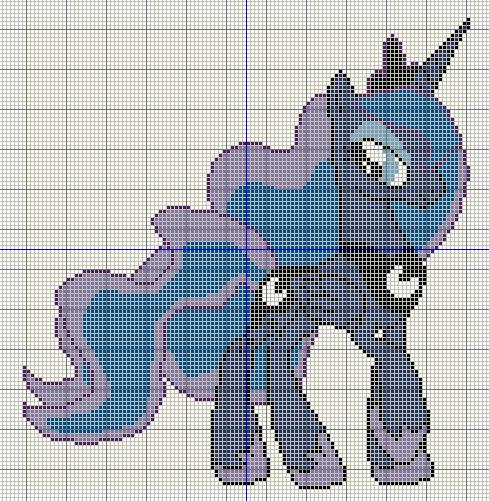 The conversion chart I used can be found here: https://yarntree.com/018anchc.htm

With Halloween round the corner I decided to rewatch the nightmare night episode of My Little Pony and boy do I love that one. It reminded me of just how sweet and awkward she was in the first season. I suppose that's what a thousand years on the moon will do for you.

This design is based more off Luna's appearance in the second season, shes grown up a little more, learned to stand tall and give orders without having to use the Royal Canterlot voice and in this way feels more majestic and graceful.

This design is just the right size for a cushion or quilt I think that Luna would go great with some calming blue fabric or some fabric containing stars and moon patterns to help a special someone sleep knowing Princess Luna is watching over their dreams.

For a few more of my (now rather extensive) list of My Little Pony cross stitch designs here are some links: