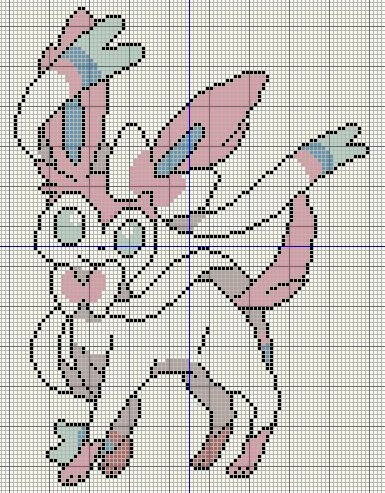 This is a cross stitch design of the latest addition to the Eevee evolution line Sylveon.

Not only is sylveon very cute it is also an example of the new fairy type pokemon. I have not yet gotten far enough in the game to get an eevee but when I do I am so training a Sylveon. I also like the shiny variation of this pokemon. Its a very simple change the pink and blue areas on the pokemon are reversed but that looks very nice. (much better than the many pokemon who seem to turn green when shiny)

Something which is very interesting is that to evolve an Eevee into Sylveon the player must use the Pokemon Ame minigames to increase its affection. (please note that affection is a very different stat to Happiness seen in previous games and has different effects) But don't feel daunted that Sylveon is still within reach the minigame is very easy. It is simply a case of rub the bottom screen with your stylus to pet the pokemon. The pokemon will have a happy face if it likes the area being petted and look concerned, worried or angry if you are touching an area it does not like. For example my lovely Beedril hates having its stingers touched and will make an attack stance at the screen to show its dislike. There are also minigames to play which ear Pokepuffs which are just little cakes. Each cake will also increase the pokemons affection but they will not eat it if they are full. Thats easy to tell too. The pokemon will turn its face away from the pokepuff if it does not wish to eat it. But come back later and it may be hungry again.

Cubchoo and other Pokemon are property of Nintendo and Game Freak.
For the Pokemon official website heres a link: http://www.pokemon.com

For the Buzy Bobbins Index page Click here.
Posted by Gemma at 05:22