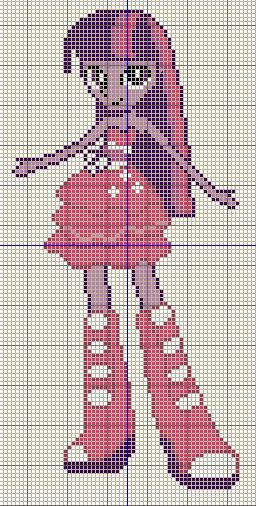 This is a cross stitch design of Twilight sparkle in her dress for the Fall formal in Equestria Girls,
Doesn't she look so pretty in this dress? I was expecting twilight to have something a little more conservative perhaps a longer skirt or something covering the shoulders but still the colour scheme is fitting and the ruffles on the skirt area gives the dress a nice shape.

I must admit I have just brought the Equestria Girls Twilight Sparkle Doll and Pony set. I promised myself I wasn't going to buy any of these larger dolls but seriously look at the Pony that comes with it. Its such a lovely variation of Twilight in her princess form and I wasn't able to find it separately. But you know the doll itself grew on me after it was sat on my display shelf for a little while. The outfit doesn't look anything like the outfits she wears in the film but it is still quite pretty. This is the first time I had actually considered making my London Expo cosplay outfit based on a doll version of a character. I don't think I could pull off the fall formal outfit (too short for my tastes) the dolls tartan skirt is really pretty and I can make it longer due to the cute pink underskirt.
Not sure I could go with this idea though. I mean who would even recognize the cosplay?

Twilight Sparkle and characters from Equestria Girls and My little Pony: Friendship is Magic belong to Hasbro. This is fan art for other cross stitching fans of the show to share.I claim no rights to the character.


For the Buzy Bobbins Index page Click here.
Posted by Gemma at 05:13