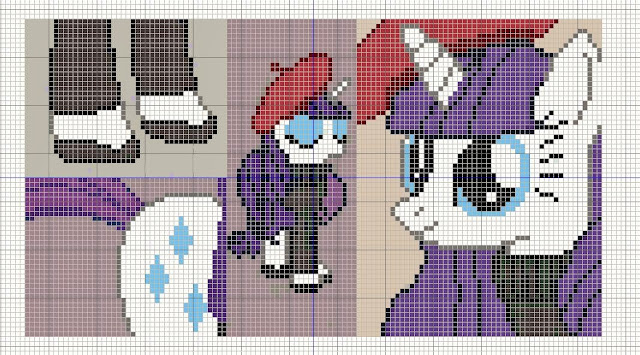 
This is a cross stitch design of one of my favourite Rarity costumes the Hipster outfit from the Episode Sweet and Elite. If you are having trouble finding it in the episode it is shown very very briefly during the song 'Becoming Popular' but then again theis doesn't seem to be unusual for rarity to have a costume shown for only briefly and in this song there are just loads of lovely Rarity outfits.

The reason I like this one is because it also comes with a sweet new hairdo for her I have previously wondered if Raritys very bouncy mane would ever lie straight. Plus its very classy without being over the top or quite frilly like some of the large dresses we see her wear. It helps to show that Rarity is a pony of varied tastes.

This costume is also a very easy cosplay. I saw a few people at the London expo this year in this outfit complete with a purple wig and some accessory with the cutie mark on such as a necklace or badge.
I did spot this wonderful take on this outfit on deviantart: Cosplay picture
I just love the cutie mark is worked into the design of the dress and how that wig is just spot on with the curls. Its facinating to see the different interpretations of these characters in cosplay. From people dressed as horses in quad suits to completely humanised versions of the outfits I think the community has seen it all.

For more My Little Pony cross stitch here are some links:

For the Buzy Bobbins Index page Click here.
Posted by Gemma at 04:45