Hello everyone,
This post is coming up a bit late since I look so many photos at the convention it took a very long time to pick the very best ones. (trust me there were so many talented cosplayers I'm so sorry I have to cut this down to one post)

As for the convention itself it took place in the spacious Motorpoint arena which was filled to the brim with things to do, things to see and as always geeky things to buy. There were also a variety of talks, celebrity guests, board and video games to play.

Heres a little sneak peek of just how much filled the arena and just how many people came to have a great time on the day.

Lets take a look at some of the amazing cosplayers I found at the event: 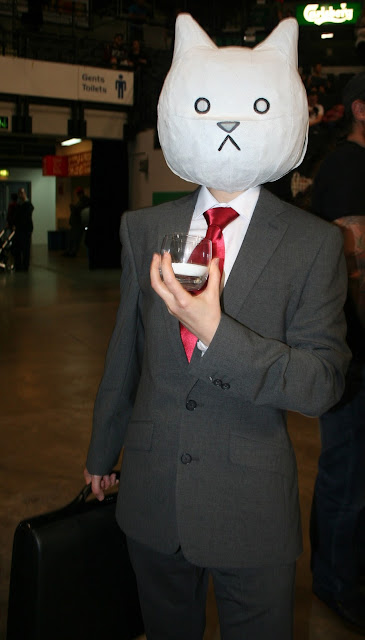 This is a wonderfully clever cosplay of Business Cat, as you may guess from the name is a cat who runs a buisiness in an adorably funny way. This cosplay comes complete with milk in a sophisticated glass and a briefcase (which is presumably full of wool and treats.)

I'd like to raise a round of applause to this cosplayer for making the mask and of course for being able to wear it for so long considering how hot a convention can get even when not in costume.

If you'd like to find out more about Business Cat he is the star of a comic found here:
http://www.businesscat.happyjar.com/

The Mad Hatter from Alice in Wonderland

This is an amazing cosplay, this cosplayer even took the trouble of exactly copying the make up and eyebrows for the mad hatter which must have taken ages to do.
If you take a close look this cosplayer has also included the row of threads that the mad hatter wears. I do wonder if this could also double as a holder for someone coming to the convention as a cosplay repair station?
Anyway this cosplay is just spot on and full of loads of detail. Well done! 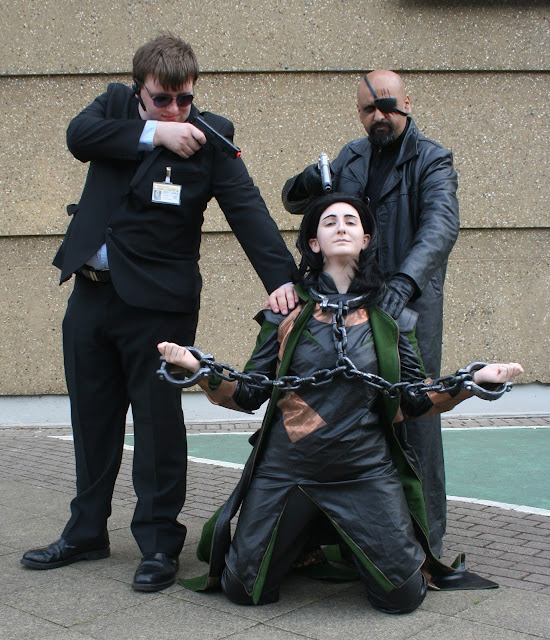 Sheffield was almost in severe danger when Loki escaped into the arena! With Thor, Captain America and the other avengers busy buying comics and posing for photos it was up to the Agents of Shield to save the day and put Loki back into containment!
Luckily the day was saved and as always the Agents just took it as another day on the job while Loki redoubled his plans for revenge and to get the ultimate source of power. Who would have thought they would have hidden it right in the middle of a comic convention?

All joking aside this is a fabulous cosplay group, each one kitted out perfectly. I did spot one little boy hiding behind his father so Loki didn't spot him. Well done to all three of you for this amazing cosplay and an amazing well practice pose for photos! 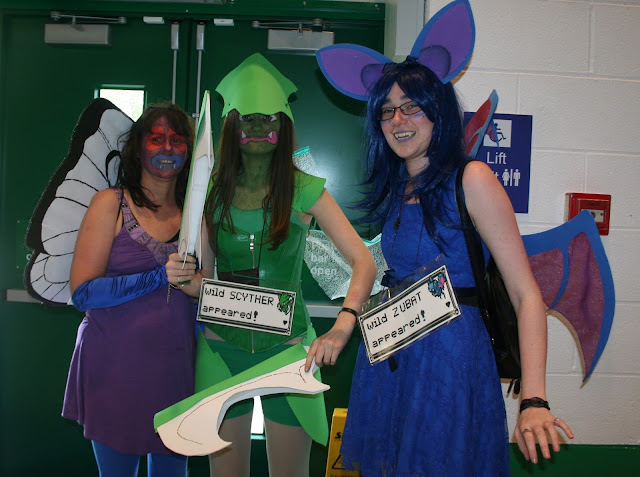 This trio of Cosplayers certainly drew a crowd when they walked into the Arena. The lovely Syther mentioned that their hat had already been knocked off by someone throwing a surprisingly accurate plushie Pokeball. There were a few people trying to take pictures of the cosplayers through the Augmented Reality function on Pokémon Go.

These beautiful gijinka costumes are colourful and fun. I love the way that each cosplayer chose the most important elements of each Pokémon so we know who they are meant to be. The wings on each one are especially awesome and Sythers claws being hold able items are a nice touch (since I imagine if they were firmly attached they could well get in the way) 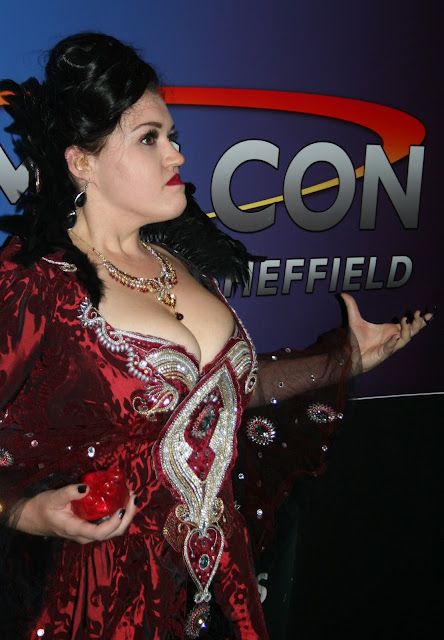 Once upon a time - Regina

This wonderful cosplayer rocked the stage at the cosplay competition. (and scooped a well deserved top prize in the contest) not only is this villians costume amazingly detailed down to the beads and sequins this cosplayer really knew how to show off the Villian look. I had to resist the urge to hide after taking this photo as she did appear to be getting ready a particularly evil spell! However that is all part of the fun of the Cosplay contest to pretend to be your favourite character for a little while.

I wonder how long all those beads and sequins took to sew on to the outfit? By the sheer number on the bodice alone this must have been many nights worth of work and don't forget everyone that there are even more on the sleeves to be sewn on. Well done to this cosplayer for this amazing achievement! I hope you can use it for a few more conventions to come to really show off your skills. 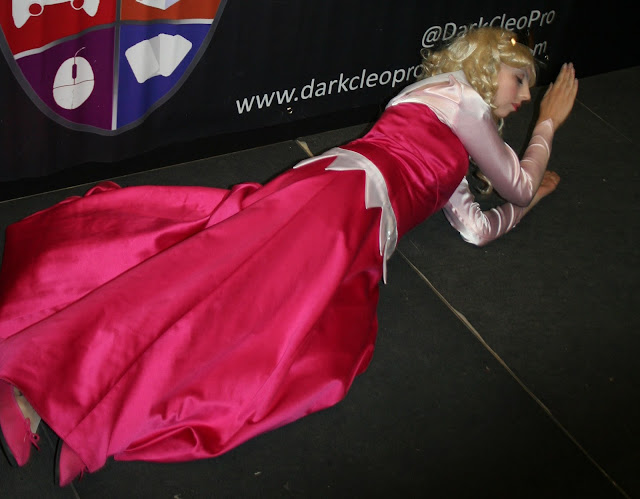 This cosplayer was so dedicated to her Sleeping Beauty cosplay that she took a little nap on the cosplay stage. Either that or making all the details on this costume just took it out of her since it is very accurate even down to all the shades of pink used in the costume.

I'll say well done to this Cosplayer for all of her hard work once she wakes up. 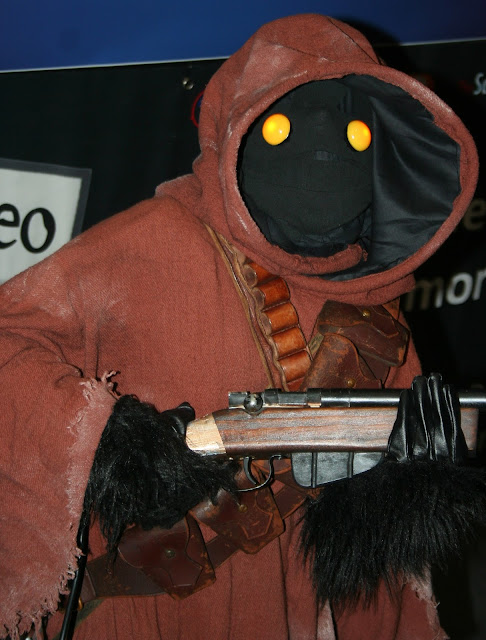 I spotted this cheeky little Jawa at the cosplay contest. I love all the little details on this cosplay and lets not forget the fact thet the leather areas are a little worn rather than brand new. That's a excellent touch since I don't think the Jawas would often be popping to their local clothes shop to buy themselves a new ammo holster.

On a side note this Jawa decided it would be a good idea to make off with some of the tech from the backstage team at the contest and almost took off with a microphone but luckily the team sprang into action and retrieved it. 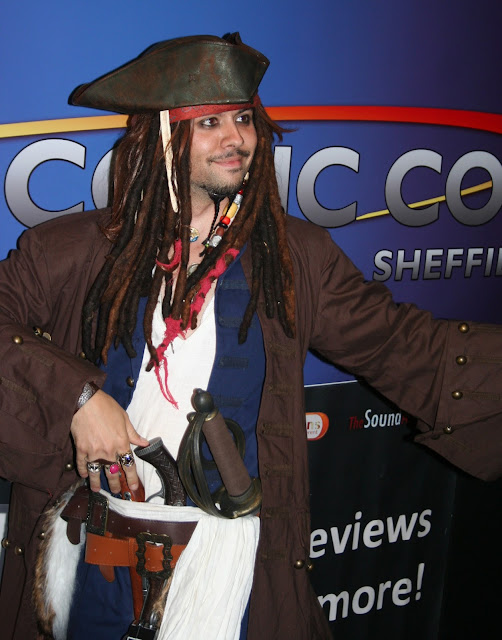 This cosplayer has done a wonderful job of  replicating the ever popular Captain Jack Sparrow, down the details, beard decorations and even copying the famous slightly wobbly walk that our lovable Captain always displays.

Take a moment to look at the way this cosplayer even has the Captains famous dreadlocks (I honestly wasn't sure if this was a wig or real hair) and even his collection of shiny rings because what pirate would turn down such a handsome treasure? The coat is an excellent feature in this cosplay, sometimes when a character has an element which seems plain such as the plain brown of this coat it is even more important to ensure that any details that do exist are correct as these will draw the eye. Indeed this coat does have those little touches from the cut of the sleeves to just the right type of brass buttons. Well done to you Captain Jack Cosplayer for your hard work is making the costume and emulating the character. :) 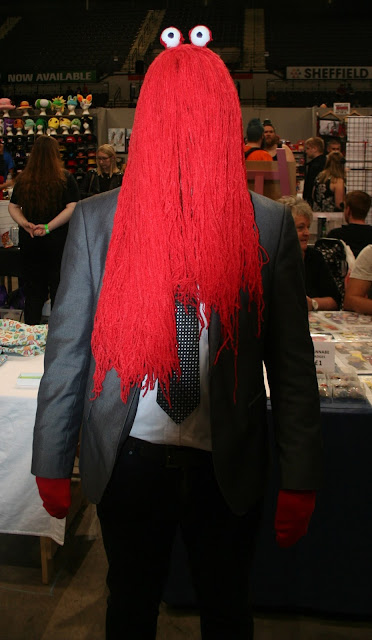 This is a brilliant version of the Red Guy outfit from Don't Hug me I'm scared. Don't worry its not a typo this character doesn't have an official name so fans have given him the name Red Guy. He is a person in a full body costume who stars in a childrens TV series which has a tendency to go wrong (or creepy)

This cosplay must be very hot since the wig is made mostly out of red wool and covers the whole head. also it looks like each strand of wool has been added to the hat individually making this actually a while lot more work than it appears to be on the surface. Well done to this cosplayer for having the patience to make this costume and the fortitude to wear it all day. I hope you had loads of fun at the convention (what you were able to see through the wool anyway)

If you are intrigued by Don't Hug me Im scared its all hosted on this Youtube channel;
https://www.youtube.com/user/thisisitcollective

Be warned however though it looks at first to be a childrens program this short film is not suitable for young children. It scared me in a few places I must admit. 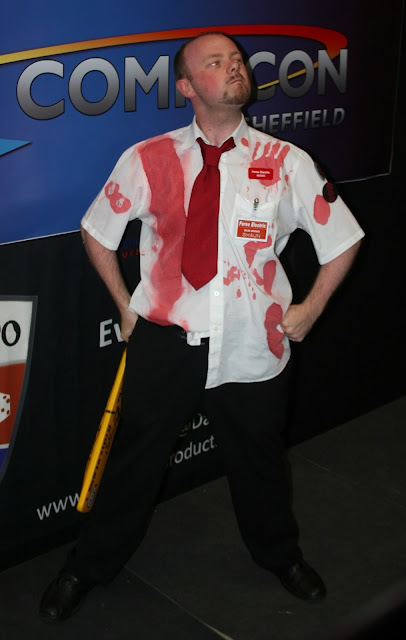 Shaun from Shaun of the Dead

This is a cosplay I have seen a few times but I love the brilliant job this cosplayer has done on it. It looks like Shaun has already been attacked by Zombies and come out a little worse for wear in this picture. Theres one question we need to ask! Did he make it to the Winchester or is Sheffield Film and Comic con on the way? Whatever the case he looks like hes ready to fight zombies with his signature cricket bat, grab a pint and wait for it all to blow over.

There are so many more cosplays I would have included but unfortunately this post is getting very, very long. So I'll have to leave it here. I'll plan to head back to this convention if I can next year as I can only expect it to get bigger and better.

For the Buzy Bobbins Index page Click here.
Posted by Gemma at 04:37