Hello everyone,
On May Bank Holiday weekend I took a trip to London to the MCM comic con and as always I met some lovely people and saw their fabulous costumes. Today I'd like to share a few of the lovely cosplays I saw at the event. I know this post is a little bit late but I have had just so much to talk about from all of the lovely events I have been to this year that the MCM post just kept slipping backwards.

First I'd like to send a big thanks to everyone who took a moment to pose for a photo during the convention. Everyone was so lovely to meet and I do hope you all continue to make lovely cosplays and have a great time at future conventions.

Ariel from the Little Mermaid 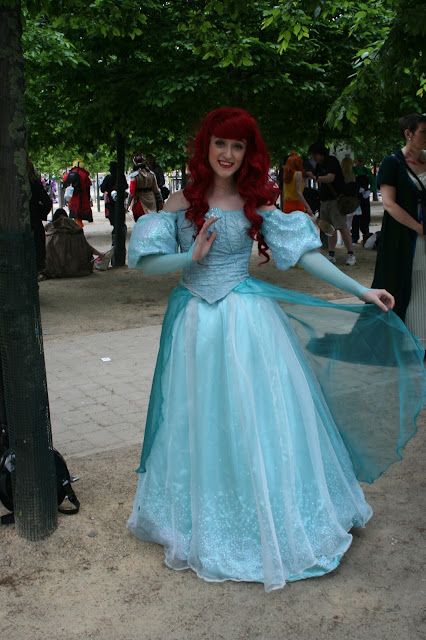 This is a particularly stunning version of Ariel from the Little Mermaid. I must note that this cosplayer very naturally took a wonderful princess pose and a charming smile.
I later found out that this cosplayer actually specializes in royal cosplays - so no wonder they are so good at princess posing with plenty of practice.
If you'd like to see more of their work they have a couple of webpages to follow, I highly recommend checking them out for a collection of finished works and a few shots of work in progress.


Beaker dressed as Doctor Who 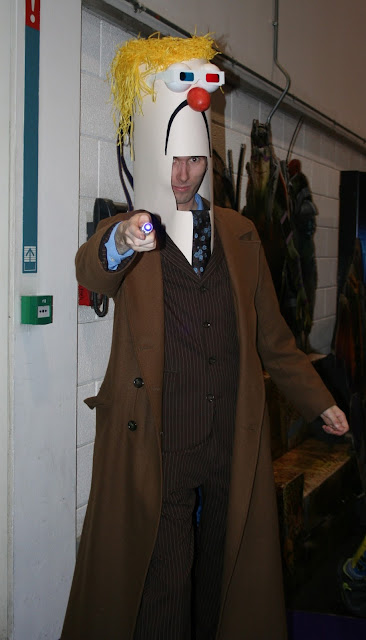 The award for best crossover I spotted definitely has to go to this stunning Cosplay. This is Beaker (of Muppets fame) dressed as Doctor Who complete with a sonic screwdriver and old style 3D glasses. This cosplay is really fun and inspired me to Google this particular crossover. I recommend taking a peek (with safe search on mind you)

Hiram McDaniels from Welcome to Nightvale 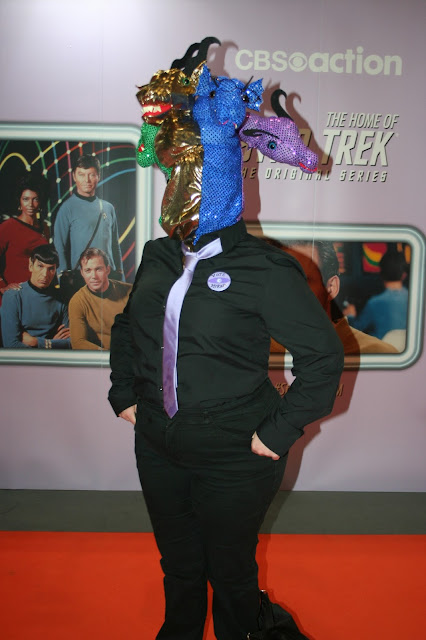 This has got to be the very first Welcome to Nightvale cosplay I have recognised. Now it is possible that there have been more of them around the events I have been to but the cosplayers version of a particular character is slightly different to how I imagine them in my head. Since there isn't very much official artwork and Fan art varies a little in details.

Anyway this is Hyram Mcdaniels candidate for the Nightvale mayoral elections and a LITERAL five headed dragon. I adore how this cosplayer has ensured that each head sits differently to help show that each head has its own distinct personality (and in the podcast a distinctive voice too)

If this cosplay has you a little intrigued check out the following link for more information on Welcome to Nightvale.
Website: http://www.welcometonightvale.com/ 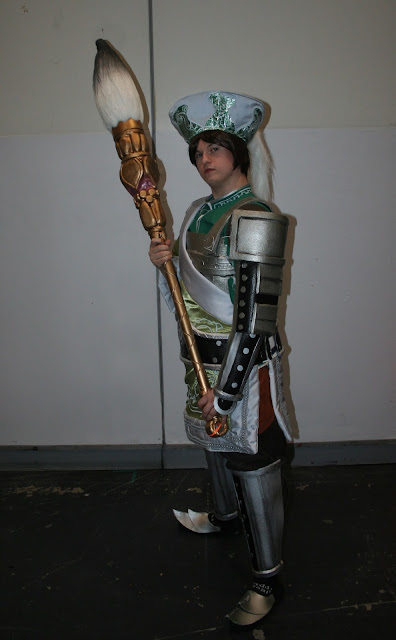 This is Ma Dai from Dynasty Warriors, I must admit I did fangirl about Dynasty Warriors when spotting this talented cosplayer. Though I admit I do most often play Bao Sanniang when playing levels with the Shu side.

There is so much detail in every aspect of this costume from the foam armor to the incredibly detailed coat. I must point out the lovely brush (yes this character does use a giant brush in the game) each strand is added to the brush separately which makes it look wonderful. I have seen versions of this weapon where the whole brush is a solid piece of foam but this is an effective way to make the weapon look realistic.

I must also point out the skilful making of the armour here and the sheer detail in the material used. Even down to the unusual shaped armour on the shoes. A friend has told me that this shape would actually catch weaponry so that the wearer of such shoes would not have their toes cut off. I learnt something new today. Hooray. 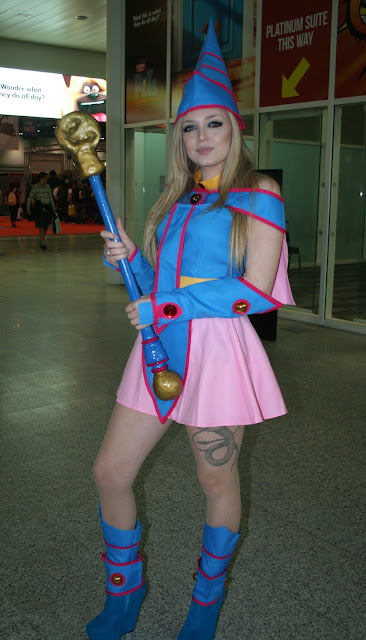 This is a cosplay of possibly one of the most recognisable Yu-Gi-Oh cards beyond Blue Eyes White Dragon. Its got a beautiful attention to detail and all that trimming must have taken a mountain of patience to sew on.
Well done to this cosplayer for a fabulous costume and even going all out to make the staff. I can't figure out how it was done, I may have to look this one up. :)

A collection of Deadpools and Spiderman 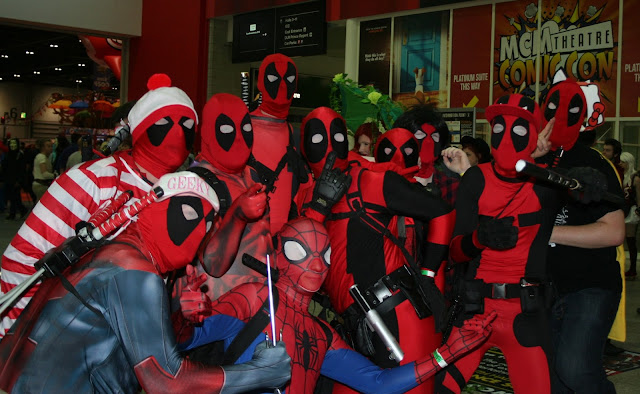 Since the Deadpool movie came out the frequency of Deadpool cosplayers has increased exponentially. This year it hasn't been unusual to spot loads of cosplayers all over conventions as Deadpool, some Deadpools are simply from the film or comics complete with swords and a variety of weaponry but some Deadpools come in another costume such as maids, street clothes or more ornate characters. However this fits very well with Deadpools character, I guess the amazing thing about him is that anything really goes and its still (probably) canon.

PS. A few years ago we considered playing a convention drinking game after the show ended, it was called 'See a Link, take a drink' I know its not very original but there were loads of Link cosplays. We considered doing it again with Deadpools but then realized we probably would not be able to make it home if we did so. :)

Looks like this Post is starting to get awfully long and I have so many more cosplays to show you all so looks like I'm going to have to be back soon with a part two .

Much love and happy stitching
Gemma

For more cosplay themed posts here are some links:
Cosplays spotted at EMcon 2016

For the Buzy Bobbins Index page Click here.
Posted by Gemma at 05:26