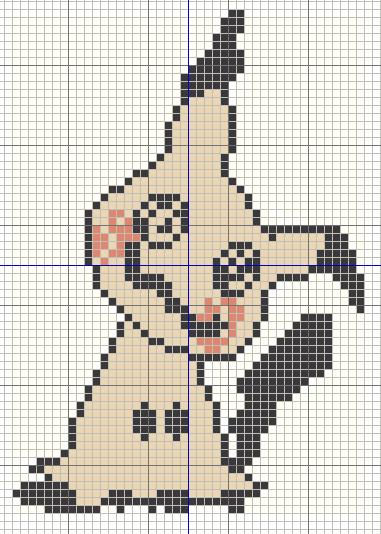 If you would like to see more art work of this adorable Pokemon may I recommend this lovely Facebook page:
https://www.facebook.com/MimikyuOfficial

The page is trying to get 10k likes by the release of Pokemon Sun and Moon so why not pop over and give them a thumbs up? I have been loving all of the cute Mimikku artwork on my news feed every day it's been inspiring me to have a go at drawing Mimikyu some friends. :)

Mimikkyu is a newly announced Pokemon which is currently taking the internet by storm so I thought I'd draw a little cross stitch design based on the first official artwork. If you have already checked that out you may notice that this picture has far less shades of yellow-grey than the original, it seems in that picture the Pokemon is affected by a light source which is not clear in the final picture. So I decided to make this design a flat colour to make it easier to sew. As there are very few official sources for this Pokémon at the moment I made a best guess with the colour but as more official drawings come out we may see this Pokémon shown as a different shade. So when that happens feel free to swap out my suggested thread number for something a little more suitable if you like. :)

Heres the current Bublapedia entry on this Pokemon:

Mimikkyu is a small Pokémon whose body is hidden under a veil. Only its beady black eyes are visible through holes in the body of its disguise. Its true appearance is unknown, but the veil it wears resembles a Pikachu. The cloth itself is yellow with black tipped ears. The face consists of black eyes, red cheeks, and a squiggly black mouth that appear to be drawn with crayons. It also carries a small stick resembling a lightning bolt to create a tail for its costume.

For updates check out this link: http://bulbapedia.bulbagarden.net/wiki/Mimikkyu_(Pok%C3%A9mon)

For the Buzy Bobbins Index page Click here.
Posted by Gemma at 00:52