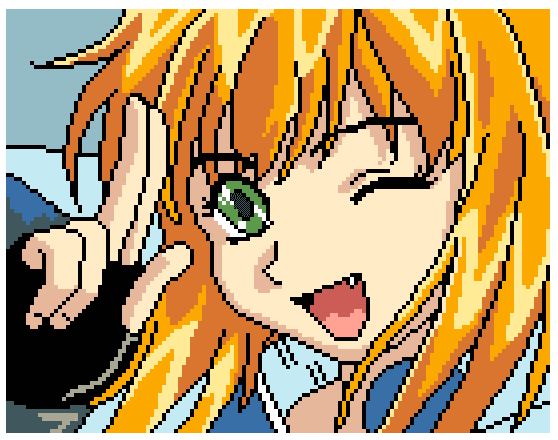 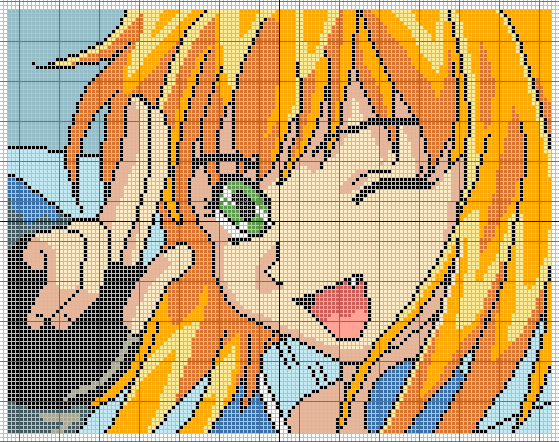 Hello everyone. This is a cross stitch design of Excel from Excel Saga
I chose to do this design after digging out an old denim jacket I had tried to embroider on with this exact picture. Its been in my cupboard for so long that it doesn't fit me any more.
However I still LOVE Excel Saga and want to show everyone this new design for the Excel Saga jacket (2nd try). Its only about 10 years after I started the first one.

For anyone who hasn't seen it Excel Saga it is a rather random and energetic Anime based on a manga comic written and illustrated by Rikdo Koshi. The author appears in every episode and declares what type of story it will be this time. It ranges from Horror and sci fi to a really cool Micky take of 90s western animation. (this episode is awesome) Then the characters have to carry out that episodes story within the confines of the new genre leading to certain hilarity each time. In addition this anime is very self aware and it plays with themes common in anime as well as this episodes genre.

This was actually the first Anime I really watched which wasnt one of the common kids shows around in the 90s. (like Pokemon) I knew very little of the tropes they were referencing and several references to other popular anime and manga flew right over my head at the time. However I still thoroughly enjoyed it and once Excel Saga started me on the path of being an anime fan I came back to it once in a while able to appreciate even more of the jokes, references and subtle nods to other media making this a series that many anime fans should at least try.

This anime does contain loads of specifically Japanese references but on the DVDs there is a cultural reference mode where a small pop up appears throughout each episode to explain references either to Japanese culture, media or subtleties in language which may not be apparent in the direct translation.This is a really cool feature to turn on while watching the series a second time. It'll really give you a few 'Oh so thats what that was' moments as well as a whole new bunch of laughs as a few more jokes just click into place. I also learnt a few things about Japanese culture along the way.
In addition on the DVD I owned there were two sets of English translations, one direct and one which is more tailored to a western audience. This means that some jokes are told in rather different ways in each of the sets of subtitles making it yet another way to rewatch the series (and like I need any more excuses to get out this set of DVDs)

For more anime themed designs here are some links: