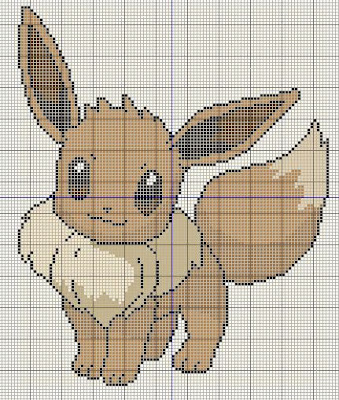 Here is a cross stitch design of the super adorable Pokemon Eevee. I must admit that this is one of my favourites. Although its stats are quite poor in this form (meaning for competitive battling it is much better to evolve your Eevee) it does fair very well in baby battles.

Baby battles are for unevolved Pokemon (Pokemon without an evolution are not eligible) at level 5 meaning most Pokemon for baby battles need to be specially bred to hatch with moves or rely heavily on TMs. One of Eevees advantages in such a battle is its ability Adaptability which boosts the power of its Normal type moves. Considering this is an arena where every single hit point counts this is very useful.

However the last time I did any serious baby battles was in the Pokemon Stadium 2 game. I do hope this gets brought back somehow as a viable battle variant because it does have many different sets of tactics and Pokemon which may not be seen in regular battles due to their lack of power.

Cubchoo and other Pokemon are property of Nintendo and Game Freak.
For the Pokemon official website heres a link: http://www.pokemon.com

For the Buzy Bobbins Index page Click here.
Posted by Gemma at 12:57